It hasn't been very long, and I already have another 2048 update. It's another small one, depending on how you look at it. Now, when you lose a game of 2048, you get a new option, a button that says, mysteriously, "KEEP PLAYING ANYWAY".

But how is that possible? The board is filled up, and nothing can merge or tunnel, what could possibly happen when you click this button? Maybe you should try it.

P.S. I've found that it's a lot of fun to use Custom 2048 to make a 1x1 game with supermerging and tunneling, turn on autopilot, and then when it loses, click "KEEP PLAYING ANYWAY". Start up autopilot again, and the result is a game that will play itself forever. But I'm pretty weird, so YMMV.

It's been a while, and this is a small update, but maybe I'll give you something better soon. MUCH BETTER. (or slighty better?)

This week's tepid update (I'm pretending they're weekly now) is that after you Undo there is now a Redo button, which will just Undo your Undo. It's sort of a way to look at what you just did, and then go back to the future with the same move and same randomly generated tile so that you can be content (and snooty) about not having technically cheated.

Also, the 'z' button (not control-z, but 'z' by itself) will Undo, for those of you who just constantly need to cheat review your last move.

2048: Autopilot and Customization Tiles with any Real Number and Infinity

Custom 2048 will now allow you to add a tile with any real number. This means negative numbers, decimal numbers, and 0. In addition, you can make it spawn infinity and negative infinity using "Infinity", "infinity", or, believe it or not, "∞", if you can figure out how to type it. (Regardless, it displays as "∞" on the tile.) Negative infinity is entered the same way, but with a minus sign, oddly enough.

Perhaps even more importantly, all real numbers, infinity, and negative infinity are assigned distinct coloring. The downside is that background colors on webpages can only display 16,777,216 colors, and the algorithm doesn't do much to avoid the colors white and black once the tiles get into higher numbers. Also, your screen probably doesn't display sixteen million colors very distinctly anyway. And even if it did you wouldn't be able to distinguish between a lot of them anyway.

Negative numbers use the "negative" of the color used by positive numbers. Decimals use a gradient that uses the colors of the whole numbers that they are between, with the center of the gradient determined by how close it is to which one. Zero is gray, positive infinity is white, and negative infinity is black. Obviously.

What is it all for, you ask? There may soon be some variations that use numbers in weird ways.

There is also now an "Autopilot" option under Settings (which also has the label toggle). Turning this on just makes the board move on its own in a way that is incredibly simple, which will only add to any frustration you might have had with supermerging, because it turns out that round-and-round movements are just about as good at keeping the board from filling up as a person who is using most of their brain power on it. Ok, maybe not most, but a lot. The bright side is that this method doesn't often get to the goal of 144, unless you make a bigger custom board.

I'll hopefully get to those things.

Supermerging and Customizable Rules 2048, Undo Button, Several Themes, and a few other things

Since the last update, I've released four themes for 2048:

I released a totally new way of playing the game: Supermerging 2048.

And a way for you to mix and match rules, such as the dimensions of the board, the probability of getting a 4, and a few other things.

Most of the theme images and theme colors are thanks to my wife, because she's awesome. 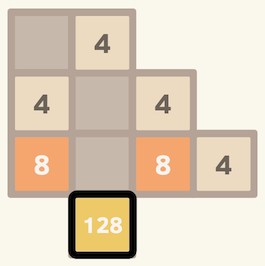 I've made some updates to Tunneling 2048 so that it's easier to play, especially for people who haven't tried this particular variation of 2048 yet.

If you don't know what I'm talking about...

Tunneling 2048 is my variation on the classic 2048 game in which you slide tiles that merge together when they match. Normally, the game starts on a 4 by 4 grid that doesn't change. In my version, whenever you get a new high tile it becomes a "tunneling" tile. Sliding the tunneling tile towards the wall of the grid creates a new space that tiles can slide into. It's probably one of the best variations of 2048. Yeah, I said it, and I'm not taking it back!

Every time you refresh the random webpage you get a new page with a random number of random elements which randomly may or may not have other randomly chosen elements nested to a random depth, which sometimes have random lengths of random text.

I'm particularly fond of the enormous buttons that have text areas on them, and menus with nonsense options in them. And the progress bars. I didn't know (or had forgetten ?) that there was an html tag for progress bars before I made this.

I attempted to follow rules as to which elements are allowed inside which other elements, but some of the rules vary depending on what else is in them or what they are in, and that required more time than I wanted to spend on it.

The next obvious improvement would be to make elements have random attributes, which should lead to links to websites that don't exist. But what would be really awesome is random css. The text would be different colors, inside boxes that are sometimes tilted at random angles, with random background colors. Some of them would be positioned randomly on the page.

But what would be really awesome are random images, random javascript (would that even be safe? probably), and maybe some areas with text that consists of randomly chosen words, possibly even arranged into grammically correct sentences.

This is a potential simulation of reality, in which I have assumed that everything in the universe is basically a photon, and that their behavior is just so counterintuitive that it is not obvious how they could behave as, for example, an electron. One way to do this, which also might work even if everything is not made of photons, is to imagine that the probabilistic nature of different attributes (such as location and momentum) are really a manifestation of the fact that the photon is made of one or more point-like particles that travel at many times the speed of light, but do so with so many random steps that the odds of them traveling any significant distance at more than the speed of light becomes negligable, and they effectively behave more like a "cloud" than a single particle, which is effectively the wave-function that is already well established. I could go on like this for a long time, but this simulation tests what would happen if a particle moved around in random steps as outlined above. Note that I'm not a physicist, so all of this is based on my very incomplete understanding of quantum behavior, and so it could all be nonsense. However, it is an interesting exercise in and of itself.

For updates on this mostly empty website, and to see what it's like to get email, enter your email address below and push the button. Oh, and add two numbers.